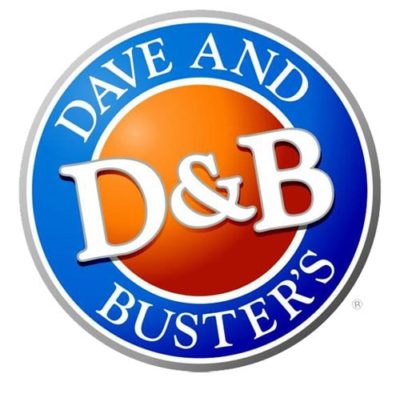 Are your kids always fidgeting at the dinner table? Do they complain of being board every time you take them out? Try taking them to Dave & Buster’s instead. Here they are encouraged to play and have fun. They can eat and then hit the arcade machines, burning off all of those calories and getting out of your hair in the process.

Dave & Buster’s is an entertainment restaurant, two words that rarely go together but work wonderfully here. In fact, this unique theme has helped Dave & Buster’s grow from a single Dallas location into a chain with more than 80 locations across North America.

Dave & Buster’s was founded in Dallas in 1982. David Corriveau and James “Buster” Corley were the men behind the brand, but they sold a majority share of their company just 7 years later.

There are now around 80 Dave & Buster’s locations in total, all of which can be found in the United States and Canada. This chain has yet to branch out into the international marketplace, which could be down to the fact that it hasn’t exactly had an easy time of things on this continent.

They average around $500 million in revenue every year, and they employ over 8,000 people across North America. But they have had their money troubles over the years. They announced an IPO in 2008, only to pull out at the last minute and later sell-off their shares to Oak Hill Capital, a private equity firm with more than $4 billion in assets. They launched a second IPO in 2014, which they actually went through with. The money raised through this offering was used to pay off debts.

Bring the whole family along. There is a little something for everyone, as well as platters that were made for sharing.

There are loads of cool, colorful and unique cocktails to sample on the Dave & Buster’s menu. This includes a selection of exclusive drinks such as their Sailor’s Spiked Root Beer and Crown Apple Smash. There are fruit juices for the kids and the designated drivers and there are plenty of other drinks to keep you lubricated as well.
You can drink while you watch sports, drink while you play and drink while you eat. The food menu is stacked to the brim with quality American fare, including juicy burgers not unlike the ones you will find on the Five Guys menu or the Carl’s Jr menu. If it’s pizza you want, there is no shortage of options and there are also seafood dishes, Mexican inspired dishes and more. It’s basically a collection of America’s favorite foods, inspired by everything from Italian cuisine to Mexican cuisine and Chinese cuisine.

There is a lot of food and drink aimed at groups and parties as well. Dave & Buster’s is a popular location for children’s parties, work gatherings and family events. It’s big on food, drink and entertainment–the perfect combination to keep the conversation flowing.

As always though, we have sourced what little menu hacks and other information is out there and we have included this on the Dave & Buster’s secret menu page. If there are any secrets to the Dave & Buster’s restaurant or arcade, you can find it here. And if you think we have missed anything, feel free to get in touch and let us know. We’re always on the lookout for new secret menu hacks.

There are plenty of snacks that can be shared with the whole group at Dave & Buster’s.

Dave & Buster’s menu prices may seem to be a little on the large side at first glance, but this is party food. It’s big portions for people in groups and for people with a big appetite. As far as price goes, they are not the cheapest. But when it comes to value for money, you can’t get much better.

If you go for a Starter, a Steak and a Dessert, following this up with a Side or two, a Drink and a tip, the you can expect to pay around $50. Add some bigger portions to this, some money for the arcades and a couple of alcoholic drinks thrown in, and it’s easy to see why many people spend in excess of $100 at Dave & Buster’s. But this is a complete entertainment venue. You get a dinner and a show, and there is something for the whole family.

To see more Dave & Buster’s menu prices, read our extensive Dave & Buster’s Menu Prices guide. We update this as often as we can to ensure that the prices remain accurate, but bear in mind that there may be some differences depending on your location.

Once the food has settled, it’s time to have some fun. There are games for kids and adults of all ages at Dave & Buster’s, and there are plenty of group activities to partake in as well.

There are all kinds of arcade machines, mechanical games and games that are a combination of the two. This is a modern arcade, and there are new games and new tech added all of the time. This means that you won’t be stuck playing the same arcade machine that your parents played when they were your age, and you don’t have to settle for rusty, out-dated games that were barely relevant back when they were invented and are definitely not relevant now.

If you’d prefer, you can also spend your time watching sports, either with your kids or as a way to get away from them (we won’t judge). Their Football HQ shows live games and other football programs. There are banks of screens to ensure you don’t miss any of the action and there is also a bar to keep you well hydrated and to help you drown your sorrows when your team loses.

For the most part, Dave & Buster’s is cheesy, fatty food. But there are healthier alternatives available.

Dave & Buster’s is big on fast food. There is copious amounts of fat, sugar and salt, with everything from burgers to pizzas on the menu. As a result, this is not the healthiest food. But if you’re watching your weight, if you have a dietary requirement, then there are alternatives to the traditional fatty, salty, sugary fare.

A Dave & Buster’s location in a shopping complex.

Dave & Buster’s grew very steadily in the early years and it has continued that steady rate of growth. The majority of their locations are in New England, clustered around this small region and spreading into the bordering Canadian state of Ontario. On the west coast, California has the most locations, but they can also be found in Texas, including one right on the border with Mexico; Florida, with locations in Miami and Jacksonville among others; and Ohio. There is also one location in the state of Hawaii.

If you visit Dave & Buster’s during Happy Hour then you can take advantage of cheaper drinks, cheaper snacks and cheaper games. On our Dave & Buster’s Happy Hour page we discuss the best times to visit, including the Power Hour, where 60 minutes of gameplay during select times and on select days costs just $10. (Hair Growth Pills)

To see more, read our Dave & Buster’s Happy Hour page. This is refreshed with the latest promotions and offers to keep you up to date.

Dave & Buster’s store hours differ from location to location. However, because they are all based in North America, with most in the US, there tends to be a little more uniformity than there is in other states. In most cases they are open from 11:00am to Midnight from Sunday to Thursday, and from 11:00am to 1:00am on Friday and Saturday.