In terms of sheer size and brand power, Orange Julius deserves to be mentioned in the same breath as beverage giants like Tim Hortons and Starbucks. But this All-American brand has been around for much longer than those coffee chains. In fact, Orange Julius makes the aforementioned chains look like inexperienced start-ups by comparison.

Orange Julius is one of the most recognised brands in the United States. Since the 1920s they have served their unique, refreshing beverage to customers nationwide. This brand has a humble beginning, but it has grown into one of the biggest chains in the food industry, with more global locations than Denny’s, Chilli’s and Krispy Kreme combined.

In 1926, Julius Freed opened an orange juice stand, hoping to create something that could earn him a respectable income. The work wasn’t easy, but the income was definitely respectable. He made the equivalent of around $250 to $300 a day in modern money.

A few years later, Freed’s friend adapted the mixture. He wanted to create something that was less acidic and thus kinder to his stomach. The recipe he created was smoothy, creamier, and different to everything else on the market. Freed enjoyed this recipe as well and sensed an opportunity.

Freed began selling this new drink in 1929 and through word-of-mouth alone, its popularity spread. The stand’s income increased to around $1,500 a day in modern money, and this allowed Freed to think about growing the brand.

The name “Orange Julius” is said to come from the customers who would queue at the stand and ask Julius for one of his drinks by yelling, “I’ll have an Orange, Julius.”

Orange Julius operates many stands and stalls in shopping malls and other high-traffic locations.

In 1987, over 60 years after the Orange Julius brand was formed, it was purcahsed by Dairy Queen. DQ had already established themselves as a leading provider of ice treats, shakes and more by that point, and this was considered to be a great catch for the brand.

However, it would take them a couple of decades before they started offering Orange Julius drinks in Dairy Queen stores. These days you can get the full range of beverages in all DQ locations, as seen on our Dairy Queen Menu page.

Dairy Queen (and, by association, Orange Julius) was later acquired by Berkshire Hathaway Inc. This conglomerate has a revenue in the hundreds of billions and owns minority shares and majority shares in dozens of America’s biggest brands and companies, including everything from IBM and American Express, to Restaurant Holdings International, which itself is responsible for the Tim Hortons and Burger King brands.

The Orange Julius menu is centered around their famous drink, but that’s not all. There are other flavors of this drink to enjoy, some of which are mainstays on their menu, while others come and go. Some of their most popular flavors include Berry Pomegranate Julius and Mango Pineapple Julius.

In 2004, Orange Julius added some healthy smoothies to their menu. This was during the smoothie craze, when the likes of Jamba Juice were leading the way and beginning to take business away from less-healthy chains. These smoothies add a little more variety to the Orange Julius menu, and are well worth a look if you want something packed with nutrients, as well as taste.

Checkout our Orange Julius secret menu to discover how you can create your own version of the drink.

The famous Orange Julius drink contains a blend of ice, fresh orange juice, egg whites, sugar and flavoring. It’s a combination like no other, and it’s an experience that you need to have at least once. Orange Julius is unique to the United States and is difficult to find anywhere outside the country, whether through the Orange Julius brand or through a similar chain.

On the Orange Julius secret menu, you can learn how to make this drink yourself. Whether you simply want to save some money by creating a big batch yourself, or you’re in a region that doesn’t have access to it, this recipe is as close as you can get to the real thing. Our Orange Julius secret menu page also contains a few other Orange Julius menu hacks and tricks, as well as other things that fans of this chain will find interesting.

You may also want to take a look at the Dairy Queen secret menu and the Jamba Juice secret menu. In all honesty, no menu or secret menu comes close to Orange Julius. But these two are both worth your while nonetheless.

This drink is cheap, and there are many different flavors available on the Orange Julius menu.

Orange Julius menu prices are towards the bottom end. This drink was first sold on a fresh juice stand, and it continues to be sold out of many stands and other small locations. This helps to keep overheads down and profits up, and they generally pass these savings onto the customer. So, whether you’re ordering your favorite Orange Julius flavor in one of their stores or in a Dairy Queen location, you can expect to pay very little.

To see the exact up-to-date prices, read our Orange Julius Menu Prices page. There are not a great deal of menu items to explore, but we have listed all of these for you, along with an updated price list.

There isn’t really much to an Orange Julius drink. On the upside, it doesn’t contain much, if any, fat. The sodium levels are also very low and at between 200 and 400 calories, depending on the size and the type, it won’t add too much to your daily total either. However, that’s where the upsides end, because there is a hell of a lot of sugar in this drink.

A Orange Julius is predominantly carbs, with a small amount of fiber and some trace nutrients. Most of those carbs are sugars, which is where the irresistibly sweet taste comes from.

As we keep saying, everything is okay in moderation. However, it stops being okay if you’re diabetic or otherwise sensitive to sugar. As for special diets, Orange Julius contains egg, so it is not vegan friendly. However, there are no meat-based products, so it’s okay for vegetarians.

As mentioned above, and on our Orange Julius Menu Prices page, there are also smoothies on the Orange Julius menu. These are sold in clear cups branded with the OJ logo, and they include all kinds of thick, sweet and healthy flavors. Some of these include Pina Colada and Strawberry Banana.

To learn more, make sure you read our Orange Julius Nutrition Info page. You would be surprised at what you can learn about this drink, and all of it is discussed on that page.

Orange Julius is a very American brand, and one that has struggled to gain traction elsewhere.

There are over 5,000 Orange Julius locations around the world, most of which are in the United States and many of which are co-branded with Dairy Queen. Orange Julius has tried to venture into the international marketplace, but for whatever reason, it hasn’t enjoyed much success.

In the 1970s, they took their product to the United Kingdom, a marketplace that has provided an instant success for popular US brands. However, it didn’t really take, and within a few years it had disappeared. The same happened when Orange Julius tried their luck in the Netherlands.

The store hours differ depending on location, and they may also be reduced during certain holidays. However, most of the time you can expect Orange Julius to adhere to the following times: 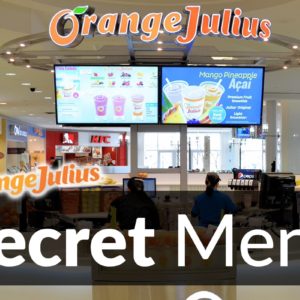