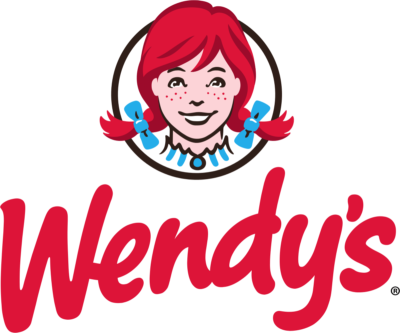 Wendy’s is an internationally established enterprise selling fresh, quality burgers and the universally-loved Frosty. Their “You Know When It’s Real” motto holds true, with an impressive arsenal of juicy, grilled burgers on the menu.

Locations: 6,500+ locations throughout the United States

A girl with short red hair braided on both sides- that’s Wendy’s logo alright (though sometimes I’m confused if it’s a girl or a lady). We’ve known her for almost half a century of serving fresh and delicious meals that fill our tummies. The meaty and cheesy hamburgers of all sorts, sea-salt fries, sweet frost, and all that they serve; you can just recap how Wendy’s has been a part of every household all over the world. “Quality is our Recipe”, that’s how they describe it on their logo. No doubt they’ve been very successful throughout the years that passed in spite and despite the heavy international food-chain competition. The girl is pretty tough.

Wendy’s is committed on serving quality meals made from fresh, natural and well-selected ingredients. Every employee of the fast food chain is dedicated to fulfill customer satisfaction by serving them great-tasting foods, take-out or dine-in, with a sense of friendliness. That’s why a lot of people love to stay at Wendy’s; the food plus customer rapport are just a perfect blend.

Wendy’s have introduced us a lot of slogans on its ad campaigns. From the old running “Quality is our Recipe” (this is still used on Wendy’s logo) to what they’ve introduced in 2012, “Now that’s better”, it sure made a lot on its history.

You wouldn’t think Dave Thomas established Wendy’s in a mere glimpse of an eye without having the ‘lifetime experience’; he got a lot of what life had to offer when he was a teenager. Dave started out in Regis where he didn’t work for long. He also took a job at Walgreens where he was a soda jerk; unfortunately, after his boss found out that he was not 16 years old, he got rid of him.

That was a bad shot for him. But, Dave had really a strong connection with restaurants. When he was 15 and they moved to Fort Wayne of Indiana, he took the chance of working at the Hobby House Restaurant. He was so passionate about his work that he opted to stay even though his family would relocate. He even dropped out of high school just to pursue the job.

When Dave reached the age of 18, he came back to Hobby House after joining the Army. You can tell he had the dedication and all for restaurants. It was in 1956 when he met the Colonel Harland Sanders, the founder of Kentucky Fried Chicken. In the process, Dave got the chance to become a restaurateur. He owned four KFC branches. While KFC was experiencing a downfall, Sanders offered Dave a partnership deal. He literally did what he could to build back KFC. He made profits and opened more branches. It was in 1968 when Dave realized he needed to pursue his long-time dream of being a real restaurateur. He sold his KFC restaurants back to Sanders and opened Wendy’s Old-Fashioned Hamburger Restaurant in 1969 in Columbus, Ohio.

It was a pretty long story for a man who dreamed bigger. So that’s how it basically started with Dave Thomas. But how did he come with the name “Wendy’s”? Wendy is actually his daughter Melinda Lou’s nickname. Her siblings call her Wendy because she couldn’t catch up with her long name. Who would think the name would make a history in the food chain industry?

So that’s it. That’s how it started for Wendy’s. Currently, Wendy’s is growing. It is now the third largest burger fast food chain in the world with over 6, 500 locations. That’s not bad for a boy who worked so hard as a dreamer.

Wendy’s does have a large menu, including a breakfast menu and a value dollar menu. To view more about the menu and prices, please visit Wendy’s menu prices to find out more.

Wendy’s has many locations throughout the United States and it offers drive-through services at nearly all of them. The restaurant chain continues to grow and will soon have over 7,000 locations worldwide. It’s a proof of how Wendy’s continues to please the tummies of food lovers.

You can get a job application by visiting their website and applying for one of the positions open for hire at your nearest Wendy’s. Wendy’s jobs include working as a crew member. This position involves cashier duties, fryer duties and more. Generally, working for Wendy’s as a crew member will pay close to minimum wage according to your state. Moreover, you could work as a shift supervisor or in the management if you have the experience and credentials to apply. There are many benefits to working for Wendy’s such as health insurance and dental insurance. Please check with your local Wendy’s regarding more information about their job application process.