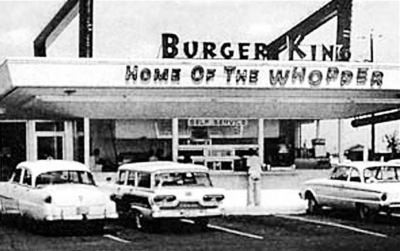 Nope, it’s not an Instagram dedicated to burgers that was the original name for Burger King. When Keith Kramer and Matthew Burns, the Burger King founders, walked into a McDonalds, they saw potential and ripped the fast food idea from them. They purchased “insta” machines that created broiled burgers, leaving customers that signature BK taste. In 1953 in Jacksonville, Florida, they had opened the Home of the Whopper.

Burger King sure does go by a lot of names, huh? In Australia, the Burger King is actually called Hungry Jacks, and rightfully so. Jack Cowin bought this franchise in the ’70s and changed the name to Hungry Jack’s because of its competition with “Hungry Jacks” the Pillsbury pancake mix.

Speaking of the Pillsbury Company, Pillsbury bought Burger King and tried to fix what was going wrong with the food chain. Coincidentally, they ended up hiring the McDonalds executive to help with this. (I bet the original owners were steaming at this point). Once they implemented everything new, the chain grew and spread like rapid fire. Talk about karma.

4. Hungry Jack is back with a vengeance

Remember how we stated that Jack Corwin had an agreement with BK for the Australian franchise? Well in 2001, he ended up suing BK due to a breach of contract for the Australian chains. They claimed in the 90’s that they weren’t being built fast enough so Burger King was expanding on their name quicker there. He ended up winning the case and got almost $50 MILLION Aussie dollars as well as rights to the Australian market. Talk about a burger-bummer.

We wouldn’t be secretmenus.com without telling you about a bit of their secret menu, now would we? They have something called frings, which is half fries and half onion rings as well as a rodeo burger and a suicide burger. The suicide burger takes FOUR patties, four slices of cheese, a ton of bacon and “special sauce”. At almost 1000 calories and 2500 mgs of sodium, this is definitely something that would make you not eat for days beforehand or after.