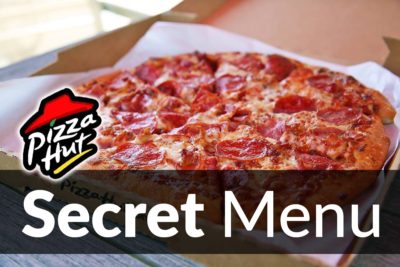 The Pizza Hut secret menu is a thing of legend. Pizza Hut have a gargantuan standard menu, and a secret menu to match. Think of something that is a combination of the Burger King secret menu and the Popeyes secret menu, but with pizza! Sounds like heaven, I know. And it’s all true. Every cheesy, doughy, delicious word of it.

There are three words that should be able to bring any pizza-lover to their knees: Bacon Stuffed Crust. I could end this there, and I’d have done enough. After all, what more do you need to hear? It’s bacon, and it’s stuffed in the crust. With cheese? Did I mention this was pizza? I don’t know about you, but I’ll probably need a cold shower after this.

This sexy beast was introduced to many Pizza Hut restaurants fairly recently. It featured prominently on some regional advertising, but in many others you could only get it if you specifically requested it. Pizza Hut actually released a statement along the lines of, “You can only get this option if you use the words ‘Bacon Crust Have’ when ordering your pizza”, presumably while they were giggling into their hands and high-fiving each other.

I know this is a secret menu item, but there’s really no need for codewords. After all the excitement, I am now no longer convinced I even want this. I mean, I’m not sure I can bring myself to say those words to a server while keeping my self-respect in tact.

So, tell Pizza Hut they can keep their gooey cheese, their finely chopped bacon, their herb butter, their garlic… and…what were those words again? 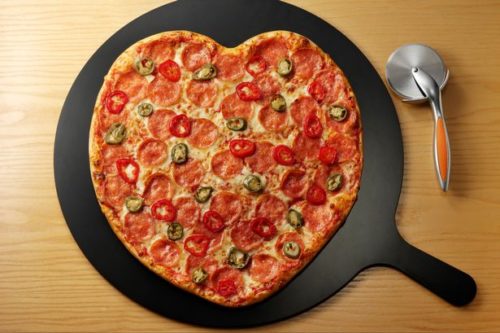 Not too long ago, the Liverpool Echo, a newspaper in Liverpool, England, (think The Beatles and you’re there) discovered a secret in their local Pizza Hut. That secret was what you see here: a heart-shaped pizza.

It is just what pizza-lovers have been waiting for. Let’s be honest, your date is not going to be particularly impressed if you show up with a pizza on Valentine’s Day. In fact, it’ll probably be the last meal you buy for her. But if you show up with this beauty, you’ll get just enough of the “aww” factor to win her over. And then you’ll have a pizza to eat, so everyone wins!

The Liverpool branch of Pizza Hut in which this was discovered said they had been doing it for years. They also hinted that this is something that is done across many of their restaurants. This is what they had to say: “Pizza Hut Restaurants has been doing this for around 10 years but only on the all-American thin base. It’s only available on Valentine’s Day across the restaurants nationwide and for no extra cost!”

It makes sense when you think about it. After all, they make the dough fresh to order, so why can’t they tweak it so it’s in the shape of a heart? And if you’re anything like us, you’re now asking yourself, “If they can make me a heart-shaped pizza, then what else can they do?” The potential is limitless. If you have the balls to ask for it, and they have the ability to make it, then why not?

Just be sure to snap a picture and send it along. The weirder the shape, the better. And before you get any ideas, we don’t want anything in the shape of, well, you know. We know what you’re thinking, and quite frankly, you should be disgusted with yourself. 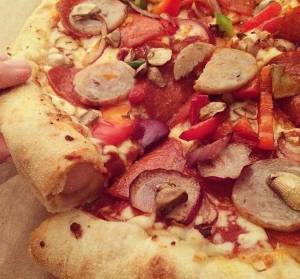 If there are three words that can come close to Bacon Stuffed Crust, it’s Hotdog Stuffed Crust. There is something about the combination of pig’s noses, anuses and chicken meat that just makes us all tingly inside.

This is exactly what it sounds like. It is a pizza crust that has been stuffed with a hotdog as opposed to cheese or bacon. If you want the ultimate meat feast, then this is your chance. Just throw all of those deli meats and cooked meats onto the top, stick this in the crust and you’re good to go. 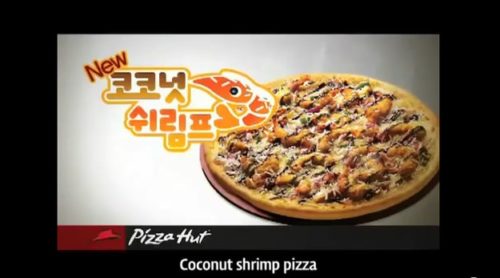 This pizza originated in Korea, where they have seemingly fed from the surreality of their names to the north and the weirdness of their neighbours to the east. They decided that spicy, cured meats, oodles of cheese and fresh vegetables weren’t enough for a pizza, so they’ve thrown some coconut shrimp on it and have tried to convince everyone they’ve created a masterpiece. When in truth, I’m not even sure if it is edible.

If you’re sitting there thinking that this sounds okay, you should know that coconut shrimp is exactly what it sounds like. It is coconut and shrimp. And it’s on a pizza. Imagine making a nice hot sandwich, filled with tomatoes and mozzarella cheese. Now imagine throwing some fried shrimp in that sandwich and dipping everything in coconut. The face you’re making now will be the face you make if you ever decide to eat this monstrosity.

Of course, we’re sure that Pizza Hut would release this everywhere if they heard the calls of desperate customers begging for them to do just that. But those calls are, surprisingly, fairly quiet.