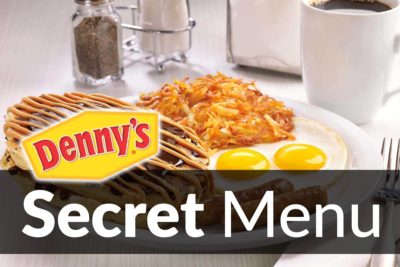 Denny’s, a breakfast favorite since 1953, is a key competitor to renowned IHOP and their grasp on the diner market, offering delicious pancakes at an affordable price. Perhaps one of the biggest competitive advantages that Denny’s has over IHOP, though, is their inclusion of a secret menu.

These well-kept secrets range from Tsing Tsing Chicken with broccoli to a mouthwatering French Toast Grilled Cheese Sandwich, displaying the diversity of Denny’s menu, both full and secret. Browse the rest of the Denny’s secret menu to get a glimpse at what more they have to change up your dining experience. 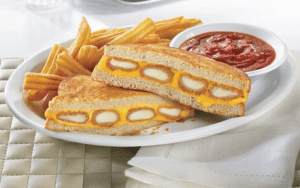 Warm, golden Denny’s bread slices toasted to perfection and filled to the brim with hot, gooey cheese. A buttery crunch on the outside coupled with warm cheesy goodness on the inside makes for a classic that is flawlessly reproduced by Denny’s. It’s not exactly a signature dish of the restaurant, however, so take the secret items with a grain of salt, as some Denny’s are not as adamant in meeting secret menu needs as others. Just ask for the dish, and if they don’t know what you’re talking about, try to insist on its existence and they may whip it up for you. It’s certainly within the capabilities of a chef at Denny’s to make one, many just do not realize it’s an option and thus deny the customer. Treat the employee with respect and you may just get a favor you won’t forget. 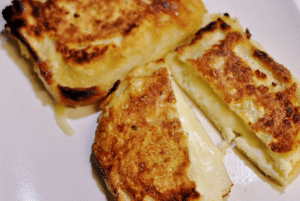 Denny’s regular Grilled Cheese pales in comparison to this beast, in my humble opinion. If you’re trying out this dish, I hope for your sake you are active, healthy, and have low blood sugar/cholesterol.

It combines the best of both worlds – sweet french toast and cheesy, buttery grilled deliciousness – to make a breakfast combination most would never imagine.

Cinnamon, sugar, butter and cheese are the most prominent flavors, and the combination could make one skeptical, but the flavors interact with each other beautifully, creating an irresistible grilled creation.

Just ask for the french toast cheese sandwich, and if they aren’t sure what you’re getting at, let them know it’s grilled cheese between two slices of french toast. Straightforward and delicious, but regardless, the dish may require some clever wordplay to end up on the grill. Explain to the employee and hopefully they hook you up with the sweet, cheesy masterpiece you desire.

Scrambled Eggs – “Cracked on the Grill”

Far too often do established breakfast restaurants – corporations that serve eggs to literally millions every year – use a powder or liquid formula, creating “fresh cooked” eggs in mass quantities or rapid time periods, all to expedite their business model. At Denny’s you can word your order to ensure you get what you pay for. 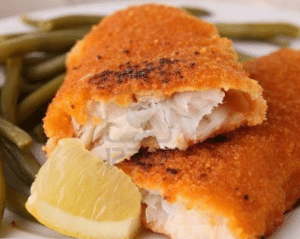 In my opinion, you shouldn’t do fish any other way than breaded, but I may be a little biased against fish. The flavor of warm, crispy, seasoned breading, however, is enough to get me past my feelings against fish.

At Denny’s, if you want to get your hands on a delicious fish filet, you’ll need to employ some persuasion tactics. It was once an item on the official menu, but has since been removed, so you must explain to your server just how much you loved the breaded fish and that you’d love to have it again.

Again, it’s within the capabilities of the restaurant to make you some breaded fish. The roadblock is that employees don’t realize that they’re allowed to sell these items to you since they aren’t officially on the menu. Explain that it’s a secret menu item, and like any other customer, pay for your fish filet and they’ll most likely whip one up for you. 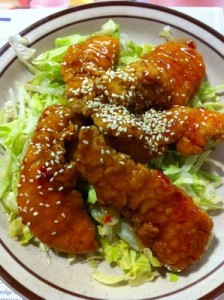 Take a look at this entrée, and it appears to be something you could order at Pei Wei or another nice Chinese restaurant. That’s probably because it is.

Denny’s, however, boasts a diverse menu in a lot of locations, and in some franchises, you can buy the Tsing Tsing Chicken. Officially, this isn’t a secret menu item, but rather an unknown member of the official menu that’s not featured in all franchises.

The meal features steamed broccoli, rice, and tender Tsing Tsing chicken in a sweet glaze, sometimes topped with sesame seeds. As its availability varies from franchise to franchise, and because the ones that don’t have it on the official menu often inadvertently create slight variations, it’s hard to pinpoint exactly what the dish is like.

What’s certain, however, is that the dish has gotten nearly universally good reviews from its customers. If you don’t see it on the menu, it’s not a part of the franchise, but you can attempt to sway them by telling them it’s sold by other franchises and maybe a little sweet talk. Being nice definitely doesn’t hurt.

Getting these unknown items at Denny’s can be a bit of a shot in the dark, and requires some skillful wordplay, but when the meal lies before you, it’s all worth it. 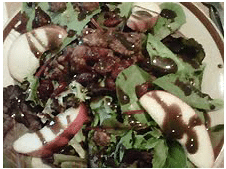 Denny’s doesn’t carry ingredients specifically to have a low carb count – a breakfast chain could never afford to sacrifice such an invaluable part of their delicious meals – but they do offer alternatives that let people watching their carbohydrates eat without guilt.

Substitution of items is often acceptable, and by thinking about some low-carb alternatives to your regular order, you can swap out portions of the meal while still retaining the taste you want.

From a burger without buns to a veggie-for-meat substitution alongside your order, you can minimize carbs without throwing taste overboard. Just ask nicely, make sure you’re substituting an item that’s available regularly, and they’ll be glad to help.

Jokingly, some say that bacon goes well with anything. At Denny’s they embody that saying, allowing customers to order extra bacon, bacon as a side, or just about anything with bacon added to it.

As long as you’re a paying customer willing to sacrifice a few bucks for a few strips of crispy goodness, they’ll put bacon on whatever your heart desires. You may get a few odd looks when ordering, but it’ll be worth it once you indulge in your bacon-injected entrée.

A favorite of mine, cheese and potatoes simply make for an exquisite combination. It’s not exactly a marvel of gourmet creation, either; I’m a terrible chef and could probably make these (or a variation of them) at home.

At Denny’s, the chefs specialize in making a mean plate of crispy hash browns. Just ask for them to add some warm, melted cheese to the equation, and boring, flavorless potatoes instantly become mouthwatering.

Just ask for the hash browns with cheese. If the server tries to deny you the possibility, tell them you’ve gotten it there before and they may change their ways. It’s really a simple addition to an already popular dish. Let them know you’ll pay extra for the favor (and the cheese, of course) and you can enjoy potatoes on a whole new level.